Judith and I were married on April 7, 1984 at St. Paul's Episcopal Church in Augusta, GA.  It was a late morning wedding.  We held the reception at Judith's mother's home and farm in North Augusta, SC.  It was wedding clothes and personal picnic baskets.   Eventually, most of the younger people changed clothes and we played volleyball and games on the front lawn.

This photo shows Judith and me with her mother, sisters 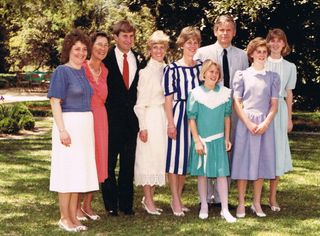 Mary Bright and Laura, and Laura's husband, Stewart Phinizy.  The girls are Laura, Marion, and Louise.

Since we've lost weight in 2008, I really don't think we've changed all that much in all those years.  We're at or about the same weight as when this photo was taken!  Judith is for sure.  I might be five or ten pounds heavier.

Judith and I were classmates at the Darden School, the graduate business school at the University of Virginia.   It has been great to have shared that common experience together.   We had the benefit of becoming truly dear friends as classmates long before a romance blossomed.  Amazingly, I met Judith the first day of classes.  We were assigned to the same section and seated in alphabetic order.  Her maiden name was Haskell.  She sat to my left and in front of me.   I remember her by her blond hair.   I was walking back to my apartment, spotted her hair, and remembered she was in my class so I caught up with her and introduced myself.  Turned out she lived in the same apartment complex (Ivy Gardens) two buildings away from me and on my path back and forth to classes.  We shared many a walk and talk together.  We ended up in the same section both semesters that first year.

As a section, we studied, partied, and played co-ed softball together.  In fact, our section won the league that included the UVA law and business school.  Judith played on the team and actually crossed the plate for the winning run in the championship game.  How 'bout that!

Dating at school happened, but it was generally an under the radar event because it was like dating at work.  We were grad students with an average age of 26 so our judgment about such things was better than the hormone raging undergraduates.  Because we weren't dating, Judith and I would have dutch treat dinners and lunches with some regularity.  It was her idea to go dutch so it wasn't a financial burden on me or put us in place of dating.

One of our favorite things to do was to go to Christians, a restaurant in Charlottesville that had the best carrot cake.  (I'm not sure they are still in business as the little bistro we used to go to.)  We still like to share a good carrot cake to this day.  Another place we went was La Hacienda, a Mexican restaurant.  Sometimes classmates would go as group and sometimes Judith and would go alone.

The first year at Darden is intense.  Lots of work from the time you get up until you go to bed.  The day is highly structured with class from 8 to 1, lunch, read cases, prepare for study group, go to study group, prepare based on study group input, and go to bed.  There really isn't that much social time except during exams oddly enough.   Because of the case method learning, you can't study, so the b-school students really have it nice in that regard.  These were times when we were the most social as a class.  Friday afternoons were usually parties of some sort, too; but business cases and papers rather than cases of beer tended to hang over us on the weekends.

It was, in fact, during exams our spring semester when our romance began.  After all those dinners and desserts, I guess we both began to appreciate each other deeply as friends.  We could share true discussions about life, school, dreams, and values.  I appreciated Judith's mature thinking and profound sense of right and wrong.  She offered great insight, good listening, and true loyalty as a friend.  Then and now, she remains very low maintenance relative to the drama I see many other women bringing into a marriage.

We graduated in May of 1982 and went our separate ways.  She went to Hartford, CT to work at Connecticut General Life Insurance Company to help launch their fee-based financial planning services.   I went to Orlando, FL to work with the Trammell Crow Company to make a fortune as a commercial real estate developer.  Despite the distance, we stayed in touch regularly… no cell phones back then – do you remember those huge long distance bills?  We had them.  We each dated other people but kept gravitating back to each other and our friendship.

On November 2, 1983 I jokingly tell Judith she asked me to marry her.  I was on a visit to Hartford to see her.  I had sown my wild oats and was ready to arrange the merger and acquisition with my best friend.

Yep, I married the milkman's daughter on April 7, 1984.  I feel very blessed to be married to my best friend and MBA classmate who can tolerate and even appreciate the entrepreneurial life I lead.