You don't have to be 3M Corporation, Apple, or IBM with a sizable research and development business to be innovative.  Meet Frank Petracca, my barber for the past 25 years.

When Judith and I first married, she would complain every time I came home from the butcher (barber) shop.  Finally, she called a friend of mine whose hair cuts she really liked.  She asked Bruce Woodruff who cuts his hair and he gave her Frank's name and number.

What was remarkable about Frank in 1985 was that he was a barber who worked only by appointment and catered to business people.  He rarely ran late for an appointment and if he did it was 5 minutes at the most.  Frank charged a bit more but the time savings of not having to wait at the barber shop for your turn was worth the savings.  Frank's wife, Donna, would call to book an appointment.  It was great customer service in a very small business.

He grew up in Italy and came to the USA as a teen.   He became a citizen – a tax paying citizen.  Frank lived in Buffalo and loves the Bills, and despises the Miami Dolphins (which is ironic you'll see shortly).

Frank and I have been through a lot together over the years.   Frank was the first person to cut Charles, my son, hair.  He called me when his wife Donna died unexpectedly from a brain aneurysm.  We cried together.  I saw his daughter marry and divorce.  We talked about everything, we prayed together, but mostly we laughed together.  As Frank moved his business I followed him from place to place.   He semi-retired and cut hair out of his home the past few years.  Yes, our relationship was hung together by a hair… joyfully!

Yesterday was my last haircut with Frank.   At 70, he is retiring and moving to south Florida to be with Rosita, a love in his life for the past few years.  She's a sweetheart.  Does this mean he'll become a Dolphin's fan?   Not Frank.  He's from the old country and loyalties remain strong.

So here I am in Frank's barber chair for the last time.   I wish Frank and Rosita best wishes for a great life together.  I have been blessed in friendship by this innovative barber.  Frank was my barber, but most of all he is my friend.

Frank was an innovator, but he never did answer my question, Frank, why are you putting that silver stuff in my hair? 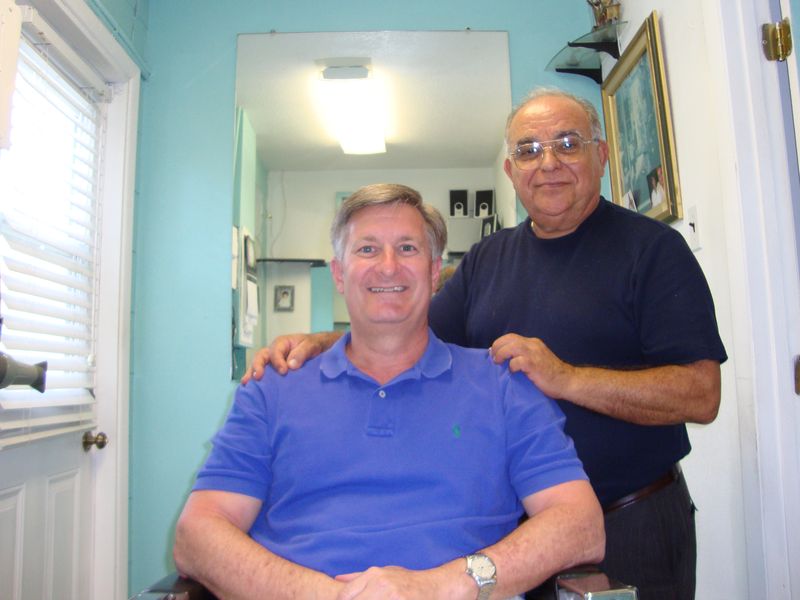