The pressure to produce immediate cash flow in business can tempt one to take shortcuts or put in minimal effort. I’m not talking keyboard shortcuts, fraud, or other illegalities here. We’re talking cutting corners in order to shade performance lightly to hit a short-term goal. While not illegal, it is a bad business practice that dampens future opportunity.

One trait of a true leader is the ability to make the call between the short-term effect and the long-term consequences. Knowing when something meets standards, however, is different from cutting corners.

One might think that doing right is a matter of business ethics.

Ethics, however, begin by having a heart for caring, honesty, courtesy, and a desire for a life well lived, even if it costs a few coins at the moment.

A few years ago, I bought a used iPhone from a retail store here in Winter Park. I was mid-contract with my cell carrier and my mobile phone was failing. I thought I would give an iPhone a try, especially since I was a longtime Mac user.

At the store, I put my name on a list to get a used one. I got a call to come see it. 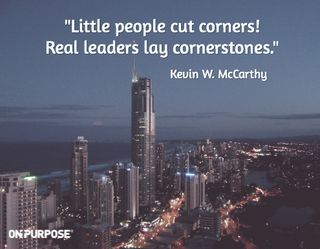 The salesman in the store showed me the phone. The phone checked out—looked nearly new with no scratches to the back or front. It was in the box. Dropped in my SIM card and it worked like a charm. I got home, however, and the charger was rejected by the phone. That’s odd!

I returned to the store and get the tech guy, not the sales guy. Turns out the sales guy who sold me the iPhone yanked the OEM charger and replaced it with a cheap version that didn’t work. That little cube costs $30 to buy. The tech guy told me, “Yeah, I don’t know why he (the sales guy) does that,” as if this wasn’t the first time! But he can’t do anything about it. I walk out unhappy.

The sales guy cut a corner on me! And he nearly got away with it. If the phone hadn’t known the cube was a knock-off, then I wouldn’t have known any differently. I trusted him and got shortchanged.

Thinking I had found a great little local business to support, I was prepared to recommend this store to several friends. Now I’m cautious because a corner was cut.

Later, I returned to the store, talked to the owner, and was immediately given an Apple charger. Kudos to the owner who mitigated some measure of the damage to his business reputation. Then again, why does he have a “corner cutter” like that working there?

I’ve never sent a person to their store.

A few years back, I had the pleasure to interview Philip Crosby, author of Quality is Free. In essence, this thought leader of the quality movement in the 1980s had a simple message:

“Do it right the first time. It costs too much no matter what to make it right after the fact.” Crosby proved the cost of cutting corners doesn’t pay.